Rasmus Hagen – Change For You

Rasmus is often described by his fans as the Swedish Ed Sheeran or John Mayer! During 2015 he’s had success on both YouTube and Spotify with various different covers of songs such as Heroes by Alesso and Tove Lo, and Jason Derulo’s “Try Me” with 370,000 streams.

During the fall, Rasmus began working with writer and producer Fredrik Sonefors, who among others have written and produced hits for artists such as Eurovision Song Contest winner Måns Zelmerlöv.

They found a great sound right away for Rasmus’ soulful voice. The first song they created together is “Change For You”, about letting old habits go, and become who you were meant to be. Look forward to hearing more from Rasmus in 2016!

On January 29, 2016, Rasmus also had the opportunity to perform for the team at Warner Music in Stockholm, Sweden: 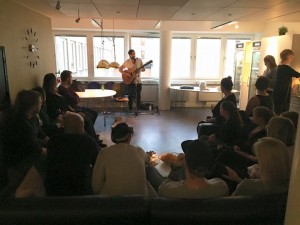 Learn more about Rasmus, and sign up to receive his email updates so you don’t miss any updates about new music and performances here.

You don't have any upcoming events.